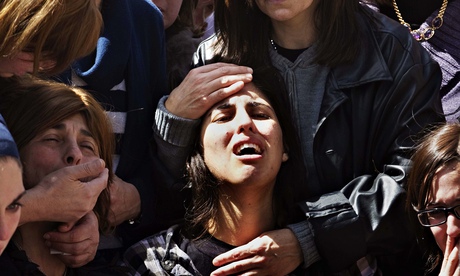 Mother of Miriam Monsonego, seven, at funeral of her daughter and three other victims of Toulouse school shooting. Photograph: Menahem Kahana/AFP/Getty Images

In the space of just one week last month, according to Crif, the umbrella group for France’s Jewish organisations, eight synagogues were attacked. One, in the Paris suburb of Sarcelles, was firebombed by a 400-strong mob. A kosher supermarket and pharmacy were smashed and looted; the crowd’s chants and banners included “Death to Jews” and “Slit Jews’ throats”. That same weekend, in the Barbes neighbourhood of the capital, stone-throwing protesters burned Israeli flags: “Israhell”, read one banner.

In Germany last month, molotov cocktails were lobbed into the Bergische synagogue in Wuppertal – previously destroyed on Kristallnacht – and a Berlin imam, Abu Bilal Ismail…